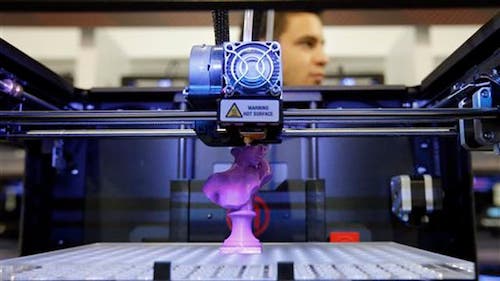 Are you planning to get a 3D printer for your home or office but have some queries about the power consumption? Are you worried about the electricity bill that you will have to pay later on?

If yes, this guide will lead you towards the absolute answers only.

The expenditure for a 3D printer does not get completed on its purchase, but it starts from here. Along with the average cost of the 3D printer itself and the materials for printing out objects, it becomes quite necessary for a person to know about its energy consumption as well.

The electricity consumption for 3D printing is a recurrent cost of electricity that one can’t ignore anyhow. So, if you are going to purchase a 3D printer, you need to look up the things that can keep the power expenses low.

Before going further, there are certain questions that we need to solve and the leading one is: How much electricity does a 3D printer use?

It is a fair question and the most obvious to ask. It is great fun to 3D print our objects but along with it we also need the different things to make it cost-effective.

The guide will provide you absolute solutions for the queries like the amount of power consumption and the ways for managing it perfectly.

Are 3D printed too expensive to run?

Well, it is one of the most common and most necessary questions that come to one’s mind while making the final selection for the 3D printers. The overall printing expenses depend upon the different things.

The very first thing that imparts in the overall pricing of the 3D expenditures is the 3D printer cost. The market is full of a wide range of 3D printing options, where each one has a unique set of features that makes it perfect for certain kinds of 3D printing. Moreover, it’s your skill level also that puts on a greater impact on the final purchase. It is always advisable for a person to go through one’s needs and preferences and then select the required model at your set budget.

The overall deal of electricity for the 3D printers relies on the brand it is belonging to, the technology involved, power usage, and quality. Moreover, if you are willing to upgrade your 3D printer, you again need to spend money on it. Issues like nozzle jams and other technical errors may also add some more to the overall costing of the 3D printers.

The other thing that adds to the total expenses of the 3D printer is electricity and power consumption. Being a 3D printer enthusiast, you need to be well aware of the fact that a 3D printer requires about 30A 12V for drawing 360 Watts of power. Power is always measured as a product of current and voltage. A printer with a heated bed of about 60 degrees celsius approximately uses 70 Watts of power per hour. This power consumed translates to about 0.7KWh for a 10-hour print successfully.

3D printing has become quite famous these days. One can easily find out a large range of objects or materials in the market that is being made through 3D printing. The majority of the 3D printers available in the marketplace are being designed to run efficiently for prolonged hours. If you are willing to have a 3D printer for industrial usage, you can easily run it for about eight hours or more consistently in a day. In case, if you are going to purchase an FDM filament printer, you can even run it consistently for about 2-3 days.

These types of printers can easily provide you error-free results while operating for more than 24 hours without any break.  The standard 3D printers available in the market usually consume about 50 Watts of power per hour. This kind of 3D printer is generally considered to be a great option for non-industrial usage.

As we said earlier, FDM printers can be consistently used nonstop for longer hours, which can further raise your electricity bills to a greater extent.

Moreover, the heating of the printers with heat beds also consumes a lot of electricity. One needs to provide about 120 Volts of power for heating the print beds. It means that if you are planning to purchase a 3D printer, you need to be ready for the power consumption of about 600 Watts per hour so that it could get heated up perfectly and can provide you with absolute 3D prints.

The most common consumable material used for running a 3D printer efficiently is high-temperature filaments and liquid resin. The cost of the filaments being used in the 3D printers depends upon their construction material.

For example, the cost of generic PLA filament is much lesser than that of PETG filaments. Moreover, ABS filaments are often considered to be quite expensive. The Liquid resin also does come up in different pricing options.

What are the total expenses for running a 3D printer efficiently?

The exact expenditure for running a 3D printer cannot be measured anyhow. Certain factors can affect the overall costing of 3D printing. The amount of power to be consumed per KWh by a 3D printer depends upon the powered components it includes. 3D printer options often come up in different varieties. There are certain 3D printers available in the market that consume a lot of electricity for giving power to different parts such as fans, hot end nozzles, heated build platforms, and stepper motors. One can easily find some 3D printers also that are quite energy-efficient and work smartly.

Moreover, different factors like printer age, printing speed, supporting material, and applicable 3D printing technology also affect the power meter bills to a greater extent. I hope, it will have solved your queries related to the costing of 3D printers, if you still have any, you can check out the electricity cost by checking out the power consumption through the formula:

And then can check out the overall costing accordingly.

Does a 3D Printer use a lot of electricity?

Finding out the exact power consumption of a 3D printer is quite complicated. But still, some solutions can help you a lot in the same way and the best one is Electricity Monitoring Tools. You can use such tools for determining your power usage correctly. These tools can be easily deployed as an interface between the electricity socket and the 3D printer for finding out the exact readings.

What are the different factors that contribute to the level of power 3D printing consumes?

The total power consumption by a 3D printer depends upon the different factors. If you want to know what exactly are they, just check out the one we are going to provide you below:

Heating at the Hot End

Different components of the 3D enclosure often tend to extract different amounts of power, but if we talk about the one who drains the most, it is going to be the hot end for no doubt. When we talk about the hot end power consumption, it’s the large nozzle that drains the majority of the power. The amount of power supply to be consumed in a 3D printer depends upon the printing temperature you have set for ensuring smooth 3D printing. Not each filament supports the same printing time of heat. The Nylon and ABS filaments often include higher melting points and hence consume more power as well.

Well, working on the 3D printing filament options, especially those that require heating processes, is simply not so easy. One needs to take care of certain factors during the entire process so as to provide absolute 3D prints.

The heat needed to be provided for heating the printer bed depends upon the heat provided to the hot end nozzle. A suitable heat ensures perfect bed adhesion and hence prevents your objects from getting wrapped during the 3D printing.

If we talk about the power consumption during the heating of the heated bed of 3D printers, two factors affect the most, and that is the temperature and size of the heated bed. If you are having a  bigger print bed, you need to adjust the higher temperature settings of your 3D printing device and hence will ultimately consume more power.

Heat losses are quite common during 3D printing. Whenever we heat our 3D printers, components like Z-axis and stepper motors get heated up to about 200 degrees celsius instantly. Both of these components are a very crucial part of every 3D printing process and are designed in such a way that they can maintain their temperature for a longer time.

Consistent heating of both of these components especially when you are not using the 3D printing machine can lead up to a certain amount of heat loss. If you are willing to lower down your power bills and of course your average power consumption, you can look out for certain ways for cooling down the heating parts efficiently.

Stepper Motors are one of the other most important parts of a 3D printer that drains a certain amount of power. It is a small component of a 3D printer that is usually being integrated for precise positioning with a motor. A 3D printer often comes up with two sets of stepper motors. The first set of stepper motors is being integrated to control the extruder gear whereas the second set is being included there to control the nozzle movement perfectly during the 3D printing. The stepper motors keep on running during the entire 3D printing project and that’s why they tend to consume a lot of power as well.

Control Board is often termed as the brain of a 3D printer. It is a component of a 3D printer that is used for controlling up multiple electrical components during the printing process. It controls all of the movable parts of the printer and hence ensures its smooth functioning.

How to lower down the power electricity consumption of a 3D printer?

Moreover, you can reduce the amount of electricity consumption on a 3D printer through filament options as well. For reducing the power costs, you can pick up the 3D printing filaments that don’t require a heated bed or higher temperature nozzles for working on.

Usage of a bigger-sized printer nozzle is also a greater idea for reducing the electricity bills to a greater extent.

So Guys! I hope you have found perfect solutions for all of your queries now. The world of 3D printing is full of fun and excitement. One can easily reduce the electricity bills for 3D printers just by taking care of a few factors. We have added up here all the details like how much electricity does a 3D printer use and factors affecting electricity consumption. I hope this guide will make your journey with a 3D printer much easier.